Stay tuned and get our latest articles directly to your inbox. Enter your email address below:
Julien Viet
Written by Julien Viet On 16 April 2013 -
Uncategorized 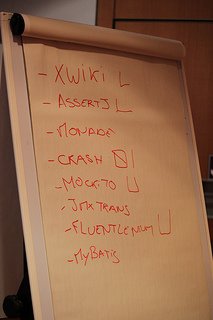 The conference started Wednesday and was dedicated to CRaSH for Julien and Alain with two events.

In the afternoon the hackergarten took place and our team was there for recruiting contributors for CRaSH, at least for the duration of the hackergarten. CRaSH is a great project for such events because it is powerful yet embraces simplicity:

This made CRaSH quite popular among the attendees and it received five contributions:

After the hackergarten it was time for the tools in action session. The room was full and the Devoxx folks had to deny access to a few people who wanted to get it. There were mixed feelings because it is sad to turn people away, but a full room makes your ego bigger. The talk went fine as usual and no obvious bugs happened during the session.

The session was also a good opportunity for us to release:

This first day ended with a funny puzzler about Apache Maven presented by Arnaud and his regular partner Nicolas De loof (a few years ago they wrote a book in French about it). To put on an amazing show, the puzzler was animated like the TV game “Who Wants to be a Millionaire”. >Nicolas questioned Arnaud about various strange or known bad behaviors of the tool (reactor, dependency management, …). Do you think that with the help of his 3 jokers (50/50, ask a friend, audience vote) Arnaud took up the challenge?

During the next two days, it was time to continue the conference, but now as attendees! It was also time for the conferences to begin. The first impression was that the conference was packed, both during the pauses between the sessions and also in some of the conference sessions themselves, long before they started. Nevertheless we were able to attend some very interesting ones:

The conference ended with a live recording of the LesCastCodeurs podcast. It was an opportunity to celebrate the fourth anniversary of the podcast and to sum up what had happened during the conference. Can you have imagine, for a three-day conference of 1,400 attendees you need to supply 1,000 liters of coffee, 9,000 cans, 25,000 snacks?!

Like last year, we really enjoyed this french edition of Devoxx conference and we are really proud to have contributed to it. We enjoyed meeting many interesting people and exchanging our point of view about the IT of yesterday, today and tomorrow.