Stay tuned and get our latest articles directly to your inbox. Enter your email address below:
Feriel Mhalla
Written by Feriel Mhalla On 22 April 2016 -
Cartoon 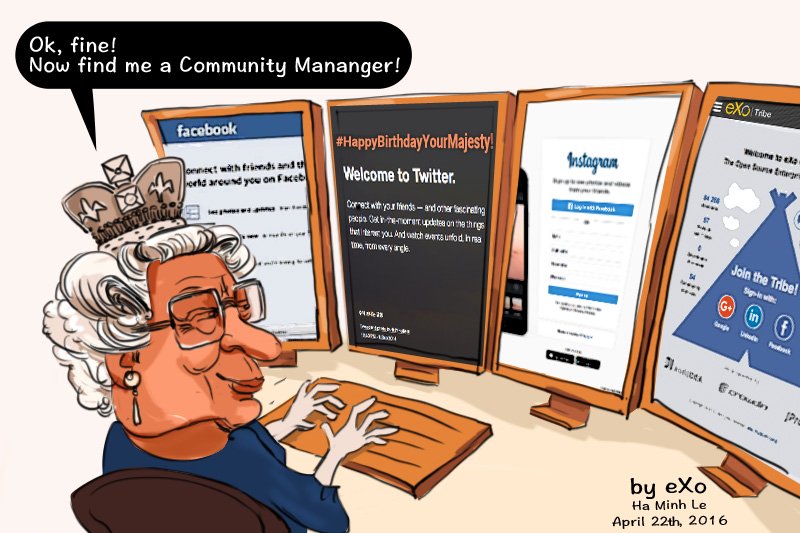 Queen Elizabeth II has turned 90 and is actively looking for a Community Manager to take care of her Twitter and Facebook accounts! Funny, right?

It’s for real, though. The chosen one will be paid up to 63K per year. For 37.5 hours per week. A golden job, advertised by the Royal Family via the Twitter account @British Monarchy, under this title: Head of Digital Engagement in Buckingham Palace. Classy, right?

The mission of this future Community Manager is as follows: Give the best of themselves to always look for new ways to ensure and maintain the relationship between the Queen and the public, as well as on the international scale. It will be an exceptional job and experience for whoever will work for the Royal House.

For the future Head of Digital Engagement in Buckingham Palace to be perfectly suited for the job, he or she must be experienced in the management of high flying websites, development of a real and strong strategy on different social media channels, and project management of high profile projects. In exchange, she or he will have the full gratitude and recognition of both the Royal Family and the royal-watching world.

Aside from the salary, the Royal Community Manager will have 33 days of rest, free lunches, and many other privileges and intangible benefits… A most Royal Job, for sure…

Happy Birthday to Queen Elizabeth, and good luck to all applicants!