Stay tuned and get our latest articles directly to your inbox. Enter your email address below:
Nouha Blagui
Written by Nouha Blagui On 23 December 2016 -
Cartoon 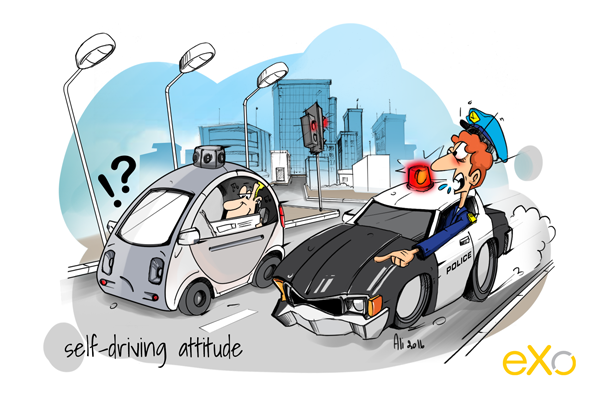 The future is here and it’s coming about with a drastic change in civilization’s basic requirements: I’m talking about getting people from one place to another, and more specifically, about autonomous cars, i.e. robotic cars that don’t require any human input.

Tests of driverless vehicles are happening every day. In the past year, Honda, Hyundai and many of the other car giants as well as various other players keen to get in on the market have announced plans to bring autonomous driving cars to the market at various times between next year and 2021.

In the meanwhile, they are running multiple tests to reassure passengers that the car knows what’s going on in the street or in the sidewalk at any given time.

Self-driving cars like the type Hyundai are working on include a dashboard that displays icons of cars and pedestrians whenever they sense movement.

As for Waymo, the self-driving car launched by Google, this aims to reduce the deaths that occur on US roads and to eliminate traffic jams that are so common in many US cities.

As we watch the developments, we can see that the trend towards autonomousness is taking us a step closer to a whole world replete with utopian elements.

After all, people seem to enjoy it automation – and why wouldn’t they?

Everything is becoming easier, from driverless travel to easier parking. Even people with physical disabilities who never considered driving as an option are now seeing it as a gift.

It’s obvious that autonomous cars will make many people’s lives easing, but nevertheless it is right that we still have so many concerns about the new shape that this technology is taking.

One worst-case scenario that could happen was reported from a test of one of Uber’s cars. After adopting the technology and starting some tests, a video of one of Uber’s vehicles running a red light was widely shared on social media, strengthening the safety fears about driverless technology.

Uber blamed human error and not the technology for the incident, stating “These incidents were due to human error. This is why we believe so much in making the roads safer by building self-driving Ubers”.

But seeing how the California Department of Motor Vehicles insisted that the company had no official permit for the tests may lead many people to be sceptical about Uber’s reassurances and potentially could see them boycott the technology before even giving it a try.

But let’s pray for now that Uber’s involvement in the autonomous experience will make the car giants pay even greater attention to the security issues to help support driverless technology and its place in a more digitized and secure future.