Stay tuned and get our latest articles directly to your inbox. Enter your email address below:
Walid Hamrouni
Written by Walid Hamrouni On 5 September 2018 -
Solutions

When a software is referred to as “open source”, it means that the public can contribute to its code because its design is publicly accessible. Open source technology has been around for quite some time now. In the beginning of software development, code was shared among developers in order to learn from each other and thus help the software development industry evolve better.

As it began to grow and become more competitive, some developers started to push the idea of free software. They felt that software should be accessible to all, not only to those who could afford it.

Eric S. Raymond, wrote in 1997 a reflective piece analyzing the hacking community and free software principles. This led to the Netscape internet suite going open source. Such a big player in software development at the time joining the open source movement helped the idea gain traction. The fact that any developer can contribute to the software makes it more secure, affordable, transparent and flexible. The idea here is: as your development group gets more diverse, you can actually source more innovation from them to increment into your product. Open source software obtained from commercial vendors who support it can also be locally personalized allowing to save costs which makes it a preference for some for many purposes. It is also often used for local in-house applications for example.

Linux is critical to the open source community thanks to its early adoption and use in creating (and operating) most of the modern internet. This operating system (OS) was built in 1991 by Linus Torvalds. His aim was to create an OS that takes into account user feedback into its development cycle. Linux is based off Unix, an open source system. For more technical details check out The Linux Documentation Project.

In addition , according to a W3Techs analysis of Alexa’s data, 39% of the top 1 million web servers are running Linux.

And if we break it down even more we can find out that in that 68% that are running Unix, Linux is used by 58% of websites. 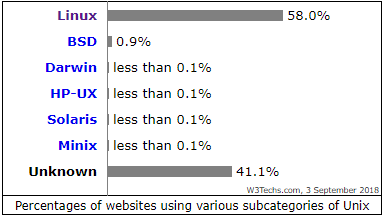 Without Linux, it is pretty hard to imagine where would be in terms of computing ability nowadays. Web search would not be a possibility, and the usefulness of the internet could have been diminished dramatically. The stability, standardization and security (at a low cost) is the reason why Linux survived and thrived. These features would not be available if not for the open source origins of Linux.

Almost 77% of smartphones worldwide run on Android operating system nowadays. Its usage has been growing exponentially since 2009. One of the reasons that Android is so popular is due to the open source nature of the software (which happens to be based on a modified version of the Linux kernel). Google, Android’s parent company, makes deals to provide the software to hardware vendors for use with their devices. This opens access to Google services and marketplace to those using the devices.

Their strategy is totally contrary to that of their biggest competitor, Apple. Apple only puts iOS on Apple devices. iOS is a closed source system, since it is restricted to Apple products, the adoption rate of iOS is limited simply due to market constraints.

The open source initiative that Android is based on allowed the operating system to thrive in the competitive smartphone market. Google became a major player in that market in less than a decade. At its root, this was due to their great implementation of open source fundamentals. Without open source software, the smartphone market would have been very different today.

Geographical Information Systems (GIS) are computer systems used to capture, store and analyze geographical and location-based data. GIS offers to recognize patterns and relationships in geographic data. They are generally used in industries involving natural resources such as forestry, oil and gas, water management as well as in various transportation-heavy sectors. GIS, when used in conjunction with GPS and logistics control solutions, can help organizations be more efficient.

Even though not every GIS solution is open source, many of this technology’s early pioneers were advocates of free software. The original GIS solution: MOSS (Map Overlay and Statistical System) was developed by the U.S. Department of Interior in 1978. Nearly all systems made since then, from GPS to location services, have built on the original open source solutions. Without these open source fundamentals, a large number of logistics control systems and location-based services would either not exist or still be in their infancy.

WordPress is one of the world’s most popular blogging and web content management systems and is driven by open source development. Without the latter, this software which supports 27% of the web would not exist. The fact that WordPress is open sourced means that anyone can contribute to its code or create new plugins for it. There are over 30,000 WordPress plugins today which allow to add new features and capabilities in terms of website and blog creation. These plugins cover various subjects such as SEO, security, analytics and e-commerce functionality. Heck, you can even use a code-free website builder designed specifically for WordPress (e.g. Elementor). Obviously, these plugins are themselves open source. So it’s fair to say that without open source, one of the most flexible CMS systems in the world would not exist.

Firefox made the browser market extremely different. Indeed, without Firefox instead of a relatively competitive browser market containing four solutions we would have only three. You would have to pick between the browsers of three tech giants: Google (with Chrome), Microsoft (with Edge/IE) or Apple (with Safari). The fact that there is a fourth option changes the market positively. It forces the proprietary systems to continuously improving their product more or risk losing market share to a brilliant browser like Firefox. Thus, open source software like this drives innovation.

Open source technology has dramatically altered the tech community. Nearly everything would be different without it. Certain search engines would not have existed as soon as they did and the internet would be significantly different. Closed source solutions would be the only option around, restricting their usage for those who can actually afford them due to the generally higher cost of closed proprietary systems.

Rate this post
Related Posts
Why open source is a good fit for the public secto...
Discover the Open Source Components in eXo Platfor...
Top 5 Reasons to Choose Open Source

I am a product marketing specialist and tech enthusiast. My role at eXo is to support marketing and operational activities for our digital collaboration tool. I will mainly blog about digital transformation, collaboration, open-source tech, and how to navigate through eXo platform.