Stay tuned and get our latest articles directly to your inbox. Enter your email address below:
Brahim Jaouane
Written by Brahim Jaouane On 6 September 2019 -
Cartoon 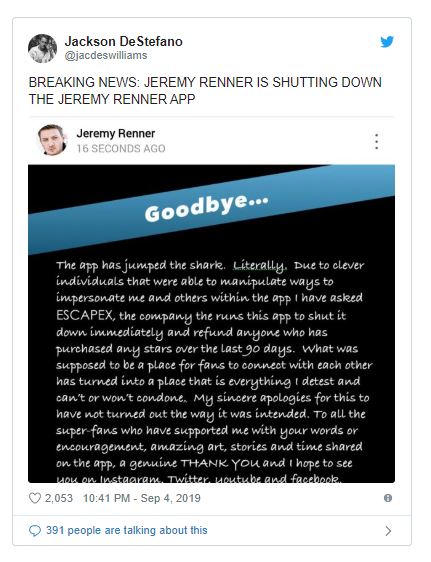 Jeremy Renner, the actor who plays Marvel’s Hawkeye superhero, shut down his official application ‘Jeremy Renner Official’ after being hijacked and harassed.

The application on which Renner regularly published exclusive images and content was also a community centre where fans could publish their own stories and communicate with each other.

Abuse and harassment increased after trolls found a way to imitate not only the actor but also fans of the app, harassing users and posting abusive comments.

In a final message on the application, Renner apologised for the closure with a post explaining what had happened:

‘Goodbye… The application has jumped the shark. Literally. Due to clever individuals that were able to manipulate ways to impersonate me and others within the app I have asked ESCAPEX, the company [that] runs this app, to shut it down immediately and refund anyone who has purchased any stars over the last 90 days. What was supposed to be a place for fans to connect with each other has turned into a place that is everything I detest and can’t or won’t condone. My sincere apologies … to all the super-fans who have supported me with your words [of] encouragement, amazing art, stories and time shared on the app, a genuine THANK YOU and I hope to see you on Instagram, Twitter, YouTube and Facebook. JR’

The problem seems to have arisen because the app had no way of verifying the identity of those who downloaded it, meaning that tech-savvy trolls could pretend to be regular users.

Renner will resume his role as in a television series of The Avengers on Disney +, Disney’s new streaming service.

The series follows its last release, Hawkeye in Avengers: Endgame, which is now the most profitable movie of all time.

Thanos is back for revenge!

The Hawkeye superhero played a crucial role in defeating Thanos, but the trolls have proved too tough an enemy.

But nothing is forever; all things must end – and maybe Thanos will be back for a rematch with these trolls?