Stay tuned and get our latest articles directly to your inbox. Enter your email address below:
Nouha Blagui
Written by Nouha Blagui On 23 August 2019 -
Cartoon 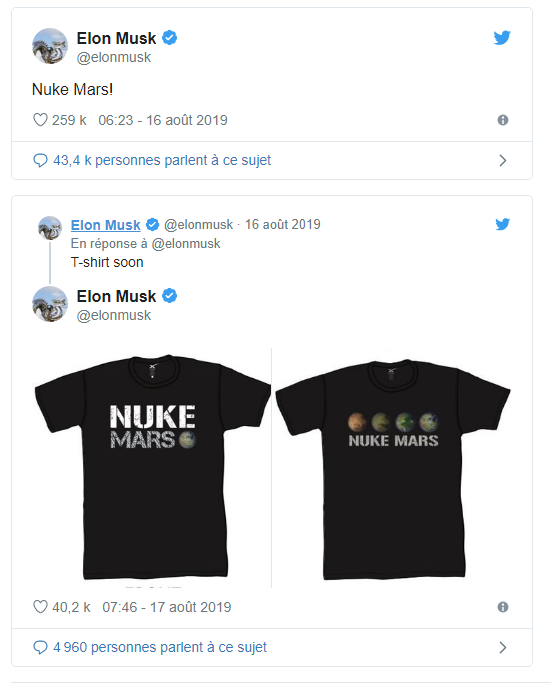 A lover of controversial ideas, the billionaire founder of Space X, Elon Musk, launched a campaign in support of the project to detonate nuclear bombs on the planet Mars. On August 16, 2019, the entrepreneur posted on his twitter account “Nuke Mars !” He even published photos of T-shirts with the same slogan, which are currently on sale on the SpaceX website for $25.

This project reflects an idea he previously expressed in 2015 on the TV set of The Late Show with Stephen Colbert, where he stated that it would be the most effective way to warm up the red planet and make it habitable for humans.

According to the businessman, nuclear bombs could melt glaciers at the Martian poles and release large amounts of carbon dioxide into the atmosphere, warming the surface of the red planet.

However, the theory was greeted with scepticism by the scientific community. According to NASA, bombing the planet is not enough to release enough CO2 to create a viable atmosphere.

Elon Musk will do anything to make his dreams of colonizing Mars come true, and on social networks as well as on TV, the businessman doesn’t seem to have given up on his idea. But for the moment, it doesn’t seem likely that it will go ahead.