Stay tuned and get our latest articles directly to your inbox. Enter your email address below:
Nouha Blagui
Written by Nouha Blagui On 23 September 2016 -
Cartoon 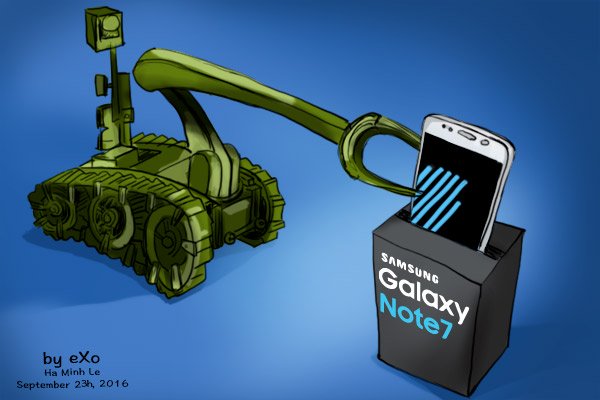 The Samsung Galaxy Note 7 exploding Batteries are a hot (no pun intended) topic these days. Since some Chinese users started posting pictures of their exploded phones on social media, we just haven’t been able to stop talking about them.

The company has made it clear that they used a different battery supplier for the Chinese market.

The Galaxy Note 7 exploding Batteries are highly dangerous, and we still don’t know if some users are just looking for financial compensation. We also don’t know if Samsung actually produced defective devices and if the company is facing the risk of losses in the Chinese market.

Whatever the truth is, this hurts The brand’s image, especially since it has only been two weeks since the launch of the iPhone 7.

Even if the Samsung Galaxy 7 was a success, people tend to forget about existing products quickly and run after shinier, brighter things. I think the people at Samsung need to sit down, talk about the issue, figure out how to solve it and maybe collaborate over a social intranet platform to come up with a way to turn the Note 7 into the success it was on track to become.

Thanks for the inspiration to Twitter user @lalpra! We had a good laugh looking at your tweet.