Stay tuned and get our latest articles directly to your inbox. Enter your email address below:
Feriel Mhalla
Written by Feriel Mhalla On 1 April 2016 -
Cartoon

previously discussed, let us dig into the financial benefits an employee-centered Intranet has on employee turnover, satisfaction, and onboarding.

Turnover is a costly issue

Every time your company needs to replace an employee, it incurs recruitment, interviewing, administrative, onboarding, and training costs.
Even in the simplest of cases, where you do not use recruitment firms and find the right replacement immediately, someone in your HR department spends time searching, screening CVs, interviewing, getting paperwork going, preparing for the employee’s arrival (desk, computer, logins, provisioning etc), showing him/her around, and training him/her on corporate procedures and policies. Several departments are likely involved in this process, including HR, business function, legal, and IT.
Once the administrative part is done, the new employee still needs to get trained on his/her job, which requires time from other people on the team. His/her colleagues not only train him/her but carry the additional workload during the time it takes the recruit to become fully operational.
If you take the recruitment process step by step and estimate the human cost of each step, you can get an idea of exactly how much recruiting someone costs your organization.
It is generally estimated that the full cost of one employee replacement varies between 50% and 150% of his/her annual payroll, depending on the seniority level.

While turnover rates depend on industries and geographies, these rates increased sharply in all developed economies in recent years following economic growth and strengthening job markets. For example, in the United States turnover rates across industries grew to 15.7% in 2014 (16.4% in 2015) after being around 9% in previous crisis years.
Even though the exact figures, derived from surveys, might not be absolutely accurate, the trend is clear. In the current highly competitive market for top-performing talent, turnover has become the number-one priority for HR, surpassing employee engagement and succession planning.

How a digital workplace helps with voluntary turnover

The turnover cost applies regardless of how the previous employee left (e.g., whether you fired the employee or he/she decided to leave), but it is usually higher per employee in cases of voluntary turnovers because you have no time to plan for them and they generally involve the most valuable elements of your workforce. So what can you do to fight voluntary turnover?
Voluntary turnover is directly linked to employee satisfaction in your company. Happy employees do not search for greener grass.
All studies concur that the most important criteria of job satisfaction relate to compensation, financial benefits, and job security, with 60% of employees finding those very important. If you have the means to double the average job salary in your field, you can likely get your turnover close to zero. However, most companies cannot afford to do that, so they settle for aligning their policies to the job market, which basically equates you with everybody else.
The question is what you can do for your employees that will not cost much but will make a difference. It turns out that employee satisfaction is influenced by many factors other than compensation, such as the following:

A Gallup survey shows an interesting trend towards an increase in the relative importance of non-financial factors (e.g., relationship with management and work environment factors) in employee satisfaction, while the importance of compensation remains stable.
A modern collaborative Intranet, such as eXo, helps with a number of employee satisfaction factors in all categories:

Generally speaking, an Intranet presents the company’s image and voice to employees, and it can nurture trust in the company’s future, growth, and relevance in today’s digital world.

An efficient collaborative Intranet usually translates into at least a 30% increase in employee satisfaction, all other factors being equal. In turn, this translates into a 20% improvement in turnover rates. The exact cash value of this improvement depends on your company metrics. Below is one real-life example from our practice.
One of our clients, a company with 743 employees, was experiencing a 6% voluntary turnover rate, which was estimated to be above the average benchmark in its industry by close to 2%. The management believed the company was aligned with the market in terms of compensation and benefits, and they were looking for other ways to engage employees. Introducing an employee-centered modern Intranet led to a 60% adoption rate in year three and an expected decrease in voluntary turnover by 0.72%. The HR department introduced other employee-centered initiatives during that time and used the new Intranet to help promote them. Surveys of employee satisfaction and participation metrics showed steady improvement.
The average cost of replacing an employee was estimated at 53% of the annual employee cost. An improvement of the voluntary turnover by 0.72% lead to an actual cost savings of $170K each year in recruitment costs.

Intranet effect on onboarding and training

A modern employee-centered Intranet helps reduce turnover, but turnover will, of course, still exist. Some employees have to leave (e.g., retirement, medical leave), and others are asked to leave. Even if you are considered the best place to work in your industry, you will still face constant replacement needs and the associated costs of recruiting, onboarding, and training.

An efficient Intranet can help lower those costs by helping new employees onboard faster and helping them with professional training and skills building. If you look at your existing onboarding process, you can easily see how it can be accelerated through a digital employee-centered workplace. Imagine how a new employee can onboard via your Intranet. He/she could access a checklist of every administrative step, form to fill out, contracts, HR procedure, and company information in one place. More importantly, he/she could interact with other new employees and start following his team’s work from day one. The possibilities are endless, but they depend on your unique context.

You can estimate the value of a better, more-efficient onboarding process through time gains. In our experience, no matter what your current onboarding process looks like, it can be cut by at least 30% through Intranet use. Estimate the time cost of the different people involved in onboarding, and you will see the immediate cash benefits from implementing a user-centric Intranet introduction. The best part is that the above benefits are not linked to adoption, and they can be fully reaped as soon as your Intranet goes in production.

Let’s go back to our previous example. The onboarding time was estimated at 124 hours per employee, including the time other employees spent to receive, onboard, provision, and train an average employee. Reducing this time by 30% amounted to $60K in annual savings.

How much money would you make?

Of course, you can estimate the value a modern Intranet has on your turnover and onboarding process by taking some internal measurements and making some assumptions.

You already have your total employee count, yearly turnover rate (including voluntary and nonvoluntary), and average employee cost. Those KPIs are available from the HR department and the finance department.
If you do not measure and follow the cost of replacing an employee, you can estimate it by mapping your recruiting, onboarding, and training process for a junior position and a senior position. Determine which people are involved at each step internally, how much time it takes them to participate in the process, and what that time costs the company.
This will give you an average employee replacement cost (expressed as a percentage of salary) and an average onboarding cost for your company. Alternatively, you can use the lowest benchmark for employee replacement cost (50%) and the average hourly length of the onboarding process as your ballpark estimate.

Once you have your costs, make some assumptions about the adoption rate and turnover rate improvement. Our average benchmark shows a 60% adoption rate in year three for eXo solutions, an average 20% improvement on voluntary turnover, and a minimum 30% decrease in onboarding time.

For example, assuming you have an 800-employee company with a 7% voluntary turnover rate, with the other metrics based on benchmarks, you can expect a $200K cash value from turnover improvement in year three and a $60K savings on onboarding costs. 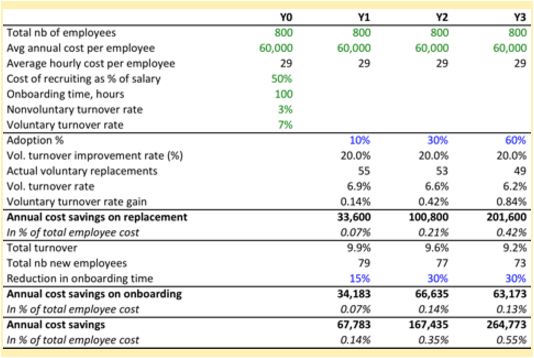 As a final note, I personally love math. However, most of the people I know do not share this feeling. I hope the above explanations were clear, not too boring, and, above all, useful. In the next post in this series, we will explore the cash benefits of improved internal communications. 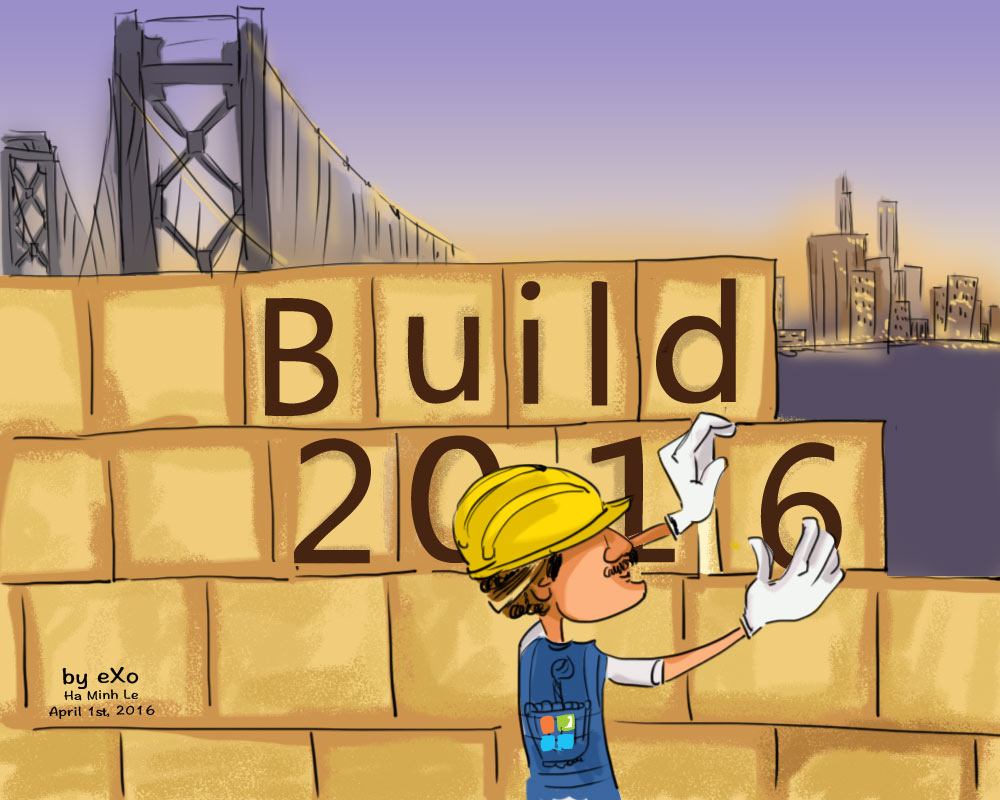 The Microsoft Build 2016 Conference was really something. And there was lots of news! Especially for developers. We didn’t cover all of it, but here is a taste!

This was actually the Build Conference’s cornerstone: Microsoft made a number of announcements about its UWP apps aka Universal Windows Platform.
There will be only one Windows Store shared between Windows and Xbox, and UWP apps will arrive on Xboxes. But above all, new tools have been made available for developers to facilitate the portage of their current Win32/.NET apps to Windows Store

Microsoft announced the next major release of Windows, previously known as Redstone. The system will be officially named Windows 10 Anniversary Update, and will be free to Windows 10 end users. The update is expected for July.

Cortana will be available on Xbox One, in a simultaneous release with the Windows 10 Anniversary Update.
We can enjoy the background music by launching Groove, and when we change apps we can keep on listening to the music we selected. UWP apps will also work on Xbox One!

We’ll see more of Microsoft’s cloud computing platform, Azure, which is building a gigantic data center to host its growing number of users. Already, 85% of the 500 largest American companies use Azure.
Microsoft will soon launch an Azure IoT kit that will be marketed with an Adafruit development card. That way, you’ll be able to code your own T-shirt with light-emitting diode (LED) !

And last, but not least …

Codenvy announced the release of its first product based on Eclipse Che, with Visual Studio integrations.

Codenvy is the first enterprise offering based on Eclipse Che that empowers anyone, anywhere to contribute to any project without having to install software, said Tyler Jewell, Codenvy CEO and Eclipse Che project lead.

We have made it possible to launch developer workspaces, on-demand, from within Microsoft, Atlassian and Jenkins development solutions. This allows developers, product managers and users to contribute and collaborate on code in a way that makes agile development continuous.

Microsoft and Codenvy have partnered up to make the world a better place, at least for developers!